The Plateau de Valensole is one of the most famous nature reserves of France and is located in the department Alpes-de-Haute-Provence the area is famous about it's lavender fields. Early in July, during my holiday, I spotted various harvest operations and got invited by some friendly farmers to film the distillation proces also. (This video is part 1 of 3) Merci aux agriculteurs de Plateau de Valensole! Sort explanation about the Lavender harvesting and distillation proces: The harvest is carried out when the lavender is in full bloom or just after usually at the end of June and throughout july and depending on the weather. The Lavender flowers and stems are cut and brought to the distillery in purpose built trailers. In the distillery a lid is lowered onto the trailer and the trailer sealed. Water is heated and made into steam is fed into the trailer through pipes in the floor. The lavender stems, although containing little oil, create a porous structure within the trailer to allow the steam to circulate. This heats the whole trailer load of around five tonnes of material up to 100 degreesC. At this temperature the steam causes the oil glands to erupt, and the oil evaporates into the steam. This steam with the oil now entrained within it, rises through the trailer and is collected in the funnel shaped lid. The mix of oil and steam is then piped to a condenser. Inside the condenser is a series of steel tubes set out in a honeycomb pattern. The steam / oil mixture passes down through the tubes. Cold rainwater is pumped between the tubes, which condenses the steam back to oil and water. The oil and water mixture is piped into the separator tank. Here the two liquids are allowed to settle out, and the oil forms a layer on the top of the water. The precious lavender oil is then collected from the separator. Thanks for watching! Subscribe: https://www.youtube.com/user/Tractorspottersub_confirmation=1 Facebook: https://www.facebook.com/TractorspotterYT Disclaimer: The content on my YouTube channel can't be downloaded, published, edited or used without my permission since it's protected by copyright. 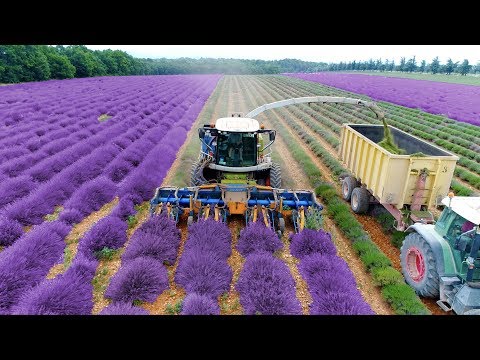