Finally got an opportunity to use the new GoPro as I put the Deere 316 and 54" hydraulic blade to the test. The northeast got hammered with the "Blizzard of 2016" which dumped between 1.5 to 3 feet of snow in several areas. High winds created lots of snow drifts, which made things even worse. It took an entire weekend to clear out all the driveways in my subdivision, and a lot of my neighbors were glad to have me around to help. I spent a total of about 14 hours on the 316 going around and plowing out my neighbors, giving a hand while I could. The Onan engine had tons of power to push the snow drifts and thanks to loaded tires, wheel weights, suitcase weights (about 550 lbs total), and chains, I was able to push through most of it with ease. Broke a hook on my left rear tire chain but I was able to fix it with bungee cords and a couple S-hooks. I had a lot of fun with this storm despite having to learn new techniques with the new machine, but having this 316 is a huge upgrade from using the 210 with belt drive, manual shift, and manual blade lift. This machine is much more suitable for heavy snow, and besides the tire chains slipping and a couple problems with the redneck-engineered blade angle, she did a great job. Watch me as I plow out my street and several neighbors. And please don't mind the shaky camera...it was a rough ride for sure. 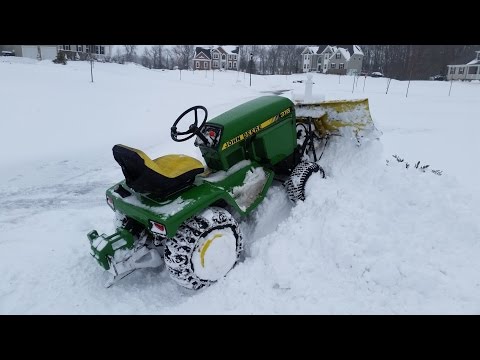 Baling Hay With The John Deere 6300

A Tractor So Old It Grew Mold-WILL IT START?